Effect of treatment with a minerai water rich in calcium carbonate plus L.reuteri on gastric emptying in dyspepsia

Aim. Dyspeptic syndrome has always been a health problem of great interest due to the fact that it is so widespread.

This interest has then become even greater in recent years, due to an increase in pharmaceutical expenditure.

In a significant percentage of dyspeptics, slowed gastric emptying is the main symptom.

Treatments based on acid secretion inhibitors and prokinetics are often inefficient in eliminating or reducing symptoms.

Treatments based on mineral water are often recommended and prescribed for this type of pathology.

This study aims to assess the effect of the administration of a mineral water rich in calcium bicarbonate (Uliveto) plus L.reuteri on the gastric ernptying of solids and on symptoms reported by a group of patients suffering from functional (non-organic) dyspepsia.

Before and after the supplementation period, each subject involved in the study was subjected to a gastric emptying assessment by means of a 13C octanoic acid breath test.
A clinical score was also used to assess changes seen in symptoms.

In terms of mean ±standard deviation results, dyspeptic subjects showed a clear improvement in emptying parameters (T ½ and T1ag) after treatment, in addition to a reduction of average symptom scores.

Treatment based on oligomineral water plus probiotic L.reuteri would appear to improve emptying of solids in dyspeptic patients.

Medium-long term longitudinal studies are required to verify the persistence of this effect. 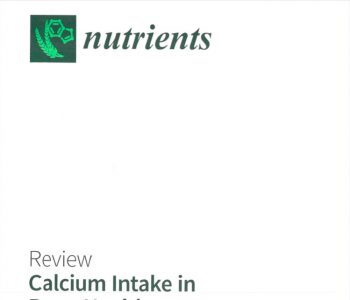 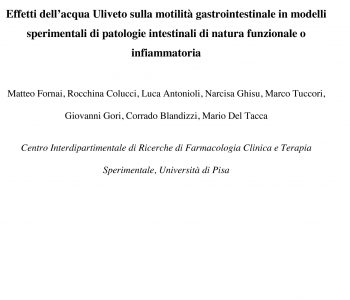 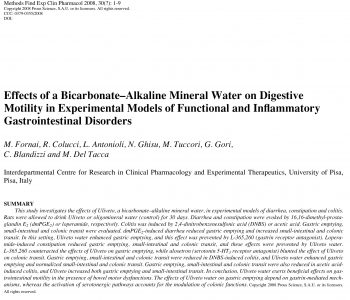 This study investigates the effects of Uliveto, a bicarbonate–alkaline mineral water, in experimental models of diarrhea, constipation and colitis. R...